Lupus, also known as systemic lupus erythematosus (SLE), is a disease of the immune system. Normally, the immune system protects the body from infection. In lupus, however, the immune system inappropriately attacks tissues in various parts of the body. This abnormal activity leads to organ damage and symptoms such as fatigue, joint pain, rashes and fever. Parts of the body frequently affected by lupus include the skin, kidneys, heart and vascular system, nervous system, connective tissues, and musculoskeletal system. The exact cause and mechanism of this disease remain unknown, however, this illness is characterized by increased chronic inflammation and diminished antioxidant defenses. 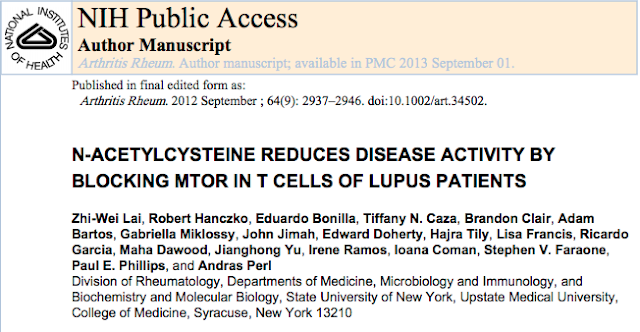 Glutathione (pronounced glue-ta-thigh-own), is a substance naturally produced by our cells from the amino acids glycine, cysteine, and glutamate. Glutathione is present in significant amounts in all our cells, which points to its importance in healthy cell function. This hardworking molecule acts as a major antioxidant, free radical scavenger, and an essential component of liver detoxification. Due to its multiple roles in the body, glutathione is uniquely poised to provide multiple benefits to lupus sufferers.

Lupus is a systemic autoimmune disease driven by inflammation in which the immune system indiscriminately attacks healthy “self-tissues” throughout the body. This process creates chronic inflammation and can lead to organ damage and even failure, as is too often the case in lupus. Glutathione has been shown to regulate critical inflammation molecules in the body and ensure their correct function. Studies have suggested a significant correlation between the severity of lupus disease and low blood glutathione levels (1) leading us to suspect that this molecule may have a protective role, possibly due to its anti-inflammatory effects.

The immune system is the primary facilitator of lupus; therefore, its treatment requires a strategy that successfully targets immune cells. Unfortunately, conventional medicine typically relies on global immune suppression to accomplish this goal, inadvertently predisposing patients to potentially serious side effects and infections. There is a large body of evidence showing the importance of glutathione in immunity. Intracellular glutathione levels have been shown to critically modify immune cell activity and promote a balanced anti-bacterial and anti-viral response. (2)
3. Glutathione protects healthy cells from damage

One of the major mechanisms of organ damage from lupus is through accumulated free radical damage over time. Free radicals are unstable oxygen molecules created by our metabolism. Their instability stems from a missing electron. In an attempt to replace the missing part, these molecules rip electrons from their neighbors. As a result, those molecules also turn into free radicals leading to a snowball effect that can disrupt a cell’s integrity, causing it to behave abnormally.

On a molecular level, glutathione helps stabilize free radicals by donating the extra electron which is why it’s famous for its antioxidant activity. In recent years, it has been demonstrated that free radical damage and oxidative stress play a major role in the progression of lupus and higher antioxidant levels correlate with better disease outcomes. (3)

4. Glutathione is critical for liver detoxification:

Our bodies are constantly detoxifying whether we realize it or not. Whenever a toxin is encountered, your cells work hard to break apart and neutralize it, before it can do damage. This leads the average antioxidant to have a short life span, since it sacrifices itself whenever it wipes out a free radical. Glutathione, however, is considered “the mother of all antioxidants” because other antioxidants, including vitamin C and vitamin E, rely on it to give them a second life.

Glutathione carries enough extra energy to not only bring spent antioxidants back to life but also to recharge itself. However, when faced with chronic stress and toxicity, your body uses up more and more of your glutathione stores until it’s gone, leaving you with toxic overload. Ensuring optimal glutathione levels helps your cells keep up with the constant toxic onslaught from our everyday lives.

1. Foods to increase glutathione: A number of foods contain the building blocks for glutathione. These can be a great addition to your diet. Garlic, asparagus, and cruciferous vegetables such as broccoli and kale boost glutathione through their sulfur components. Cysteine rich foods such as pork, beef, chicken, fish, lentils, oatmeal, eggs, dairy and sunflower seeds can also be helpful since cysteine is a critical component of glutathione production.

2. Supplementing with NAC: To overcome the obstacle of glutathione absorption in the digestive system, supplementation with NAC, which acts as a prodrug to boost glutathione levels, can be considered. N-acetyl cysteine (NAC), is generally a safe and inexpensive supplement used to replenish intracellular glutathione levels.NAC has been used successfully to treat glutathione deficiency in a wide range of conditions including infections, metabolic disorders, HIV and COPD. Over 30 placebo-controlled clinical trials with orally administered NAC supplements have found benefit for quality of life and well being of the patients. (4) In fact, current clinical trials are underway to establish the effects of NAC supplementation through its role in glutathione production for lupus treatment. (5)
3. Intravenous (IV) Glutathione: A novel approach to increasing glutathione levels is bypassing the digestive tract altogether. The IV (intravenous) method of administration allows much higher doses of glutathione to enter the cells than would otherwise be possible by dietary modification or oral supplements.

Some doctors frequently give therapeutic doses of glutathione intravenously in combination with other vitamins and minerals to provide a super dose of antioxidants and rapidly aid cellular healing.

Editor's Note: It's important to note that regular monitoring by your doctor is important to ensure that the dosage is right for you and there is no side-effect that will affect your liver or kidney functions due to over-dosage.

If this is the first time you are hearing about glutathione and its critical role in lupus, be prepared for more. Glutathione is likely to get much attention in the near future, as researchers begin to connect the dots between depleted stores of this master antioxidant and the treatment of many chronic diseases including SLE. While this continues to be a hot area for research, it is safe to say that enhancing glutathione levels can help to minimize the symptoms of lupus by reducing chronic inflammation, oxidative stress and promoting a balanced immune response.